“If GM (General Motors) had kept up with technology as the computer industry has, we would all be driving $25 cars that got 1000 MPG” – Bill Gates

“Buy cars and other products that have the least impact environmentally” – Former US Vice President, Al Gore

Llandrindod Wells, a market town of circa 6000 people located in rural mid-Wales, is hardly the place you might expect to find a business that could well revolutionise motor transport and help protect the planet from the greenhouse gases so damaging to the climate, the environment and human health. Yet, since 2015, it has been the home of Riversimple, a pioneering manufacturer of hydrogen-powered fuel-cell electric vehicles. The brainchild of Hugo Spowers, an Eton and Oxford-educated former motorsport engineer and driver with a Cranfield University MBA, it was originally located in Ludlow, a market town in rural England. It moved to rural Wales in search of larger premises and with a Research, Development and Investment grant of £2 million from the Welsh Government. As the Minister for the Environment, Energy and Rural Affairs, Lesley Griffiths, has recognised this partnership is important as Wales moves “towards becoming a net-zero nation and we progress our transition toward a Circular Economy…”

Spowers used to build racing cars but stopped doing so in 1999 and set up OSCar Automotive in 2001, which became Riversimple Engineering in 2007 and Riversimple Movement in 2015. He produced his first fuel-cell car, LIFECar, in 2008 in partnership with the Morgan Motor Company while his latest, the carbon fibre Rasa, is currently being Beta tested. “The car’s name comes from Tabula Rasa, a clean slate, not just because we are building a different kind of car but also a different kind of business,” he says. “We have an entirely new business model to suit the 21st century”. According to him the skills required are all about systems integration so instead of selling its cars Riversimple will lease them for around £500 a month and will cover all operating costs including maintenance, fuel and insurance. At the end of the “ownership”/contract period the lessee will either exchange or return the vehicle and not have to worry about depreciation.”

Riversimple’s mission is “to pursue, systematically, the elimination of the environmental impact of personal transport”. To this end, the car has the lowest carbon emissions of any vehicle at 40g CO2/km, its only emission being water. It is half the weight of a traditional vehicle and can travel for 300 miles on 1.5kg of hydrogen at a top speed of 60 miles per hour, which it reaches in 10 seconds. Also, the company has adopted a circular economy production model, which it is extending to its suppliers to ensure the production of long-lasting, high-quality vehicles with minimal waste. Not only will the cars be built to last, but much of the componentry will be recovered and kept in circulation at the end of the vehicle’s life.

The company believes its aim of eliminating the environmental impact of motor transport is fully compatible with that of creating a successful, profitable business. Moreover, it argues that “the secret lies in aligning the interests of all key stakeholders and focusing on delivering outcomes that benefit all”. To ensure this, the company has been structured so that it is accountable to six custodians who hold the voting shares and represent the interests of the stakeholders (environment, users, neighbours, staff, investors and commercial partners).

After successful beta testing, the company will manufacture 5,000 vehicles per year per factory, with the first in Mid Wales employing 220 people. As there is no pressed steel involved in the manufacturing, the size is based on the optimal throughput of carbon fibre, so the factories can be small, low cost and, crucially, scalable. It plans to build the fleet year on year, factory on factory. The Rasa will be followed with a light commercial  van and then a 4 seater family car.

At its headquarters in Llandrindod Wells, the company has established Circular Revolution – circularrevolution.wales – the UK’s first business-led hub based on circular thinking, in partnership with Swansea University and the University of Exeter and part funded by the Welsh Government. 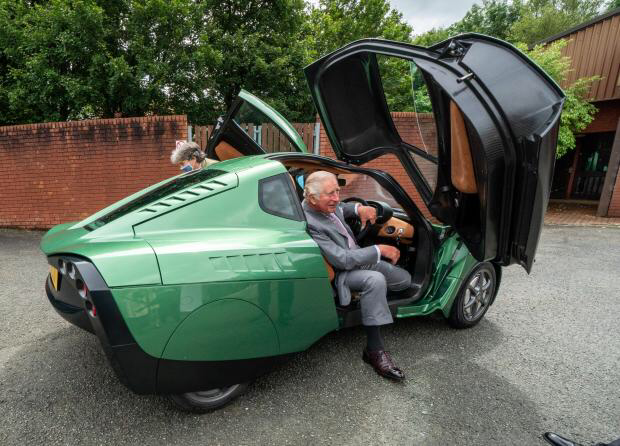 Clearly, Riversimple is a commercial venture which, as Spowers recognises, “… isn’t a social enterprise. I want to make efficiency profitable. Success will be measured by a recognised metric: money”. It is very much a Harmonious Enterprise, however, embracing profit, planet and people as well as addressing SDGs 7 (Affordable and clean energy), 8 (Decent Work and Economic Growth), 9 (Industry, Innovation and Infrastructure), 11 (Sustainable Cities and Communities), 12 (Responsible Consumption and Production), 13 (Climate action) and 17 (Partnerships for the Goals).