Today Argan oil is considered the most effective anti-ageing oil in the world, costing as much as $300, a litre. Until fairly recently, however, it was used solely by the Berbers in Southern Morocco to dip their bread in at breakfast or drizzle on couscous or pasta. Until the late 1990s, there was little international interest in it and little export potential. The country lost some 600 acres of Argan Forest a year, mainly to charcoal production and animal grazing. Now the tree is protected by UNESCO not only for its oil but to help prevent the encroachment of the Saharan desert.

Towards the turn of the millennium, foreign investors started to produce cold pressing plants, which enabled the production of a higher quality oil with lower water content and longer life. In 2003, the resultant oil was first sold as a cosmetic product in the US, and since then, demand has soared, with production forecast to reach 17,802 tonnes in 2022 and an estimated value of US$1.79 billion. The problem was that little of the profits found their way back to the communities that produced the raw nut kernels necessary to produce the oil.

Traditional production was and is a time-consuming, laborious exercise. The nuts are first harvested and dried, the pulp is removed, and the inner nuts are cracked open by Berber women using two stones. The inner oil bearing kernels are then cold-pressed to produce the oil, which requires the fruit of 7 trees to make 1 litre. An expert in Argon oil, Professor Zoubida Charouf of Mohamed V University in Morocco, began teaching the Berber Women about the importance of the trees and helped them to secure funding to set up oil producing co-operatives that brought a more business-like approach to the oil production, boosting quantity and quality. Not only did this bring much-needed income to the families of the region, but it emancipated women by providing them with a real, sustainable income and independence. In total, the lives of some three million people have been transformed, enabling them to afford healthcare as well as education for their children and themselves. According to Kaltoum Alta, who has worked at Ajddigue women’s Argan Co-operative since 2005, “my job here allowed me to look after my mother, sister and little brother. He will be starting university in Agadir in September. Without my wages, he wouldn’t be able to.” 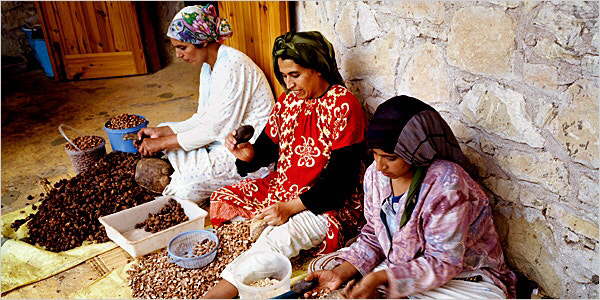 Additionally, the farmers are now planting and conserving the Argan tree forests. There are now more than 2 million acres of Argan forests in Morocco, thus conserving a unique resource and preventing further desertification, while at the same time providing feed for the goats and fuel for heating, from the leaves and discarded kernels, respectively.

While much of the end product is bought by large, global beauty brands such as L’Oreal and Aveda, in 2012 in New York, a young Moroccan female entrepreneur, Khadija Fajry, opened Kenza International Beauty LLC selling 100 per cent organic Moroccan oils. She did so after seeing that much of the Argan oil on sale in the USA was impure, having been mixed with chemicals and other oils. She needed to find a trustworthy supplier who could be relied upon to supply her with pure, unadulterated Argan oil, and eventually settled on Les laboratories Azbane run by Said Azbane, a Berber who has helped register Argan oil as a Protected Geographical Indication (PGD). She buys her oil from legitimate female-owned and run co-operatives and donates 10% of her sales to two organisations, Turning Point, which helps Muslim Women and children, and New York Women’s Foundation. As a result of working from home and keeping her overheads low, she made a profit in her first year of trading and has plans to grow her business in order to help bring about social change. As she acknowledges, though,  “Small contributions from many sources can lead to great change”.

The case demonstrates the harmonious nature of the enterprise. It addresses Economic issues- SDGs 8 (Decent Work and Economic Growth), 12 (Responsible consumption and production), and 1 (No Poverty), social issues – SDGs 11 (Sustainable cities and communities), 5 (Gender Equality) and environmental issues -SDGs 15 (life on land) and 13 (climate action). Importantly, also, it demonstrates the importance of university technology transfer in the modern knowledge economy and exemplifies Say’s “impresario” role of the entrepreneur.