The tragic scenes of refugees fleeing from war-torn Afghanistan bring home, all too vividly, the plight of the “barefoot entrepreneurs” – those people who live ”primarily in marginal, poor and excluded places and contexts” (Imas et al. 2012). While the problem is contemporary, it is certainly not new as witnessed by, for example, the Zabbaleen (garbage people) in Egypt – the Wahiya people who migrated from the western desert in the 1900s to become the informal garbage collectors of Cairo.

The largest current refugee problem, now in its 11th year, is the Syrian crisis, with some 6.8 million people fleeing the civil war that has engulfed the country since March 2011. Of the 10,000 global refugees in Wales, some 1000 are from Syria. The country expects to receive many refugees from Afghanistan according to UK Government policy and the Welsh Government’s plan for the country to become the world’s first “Nation of Sanctuary”. Speaking on 18th June 2020, Jane Hutt, the current Minister for Social Justice, observed that refugees who, often, have lost everything  “seek a life of dignity, freedom and security. Wales is now their home. They contribute to their communities, and they are rebuilding their lives here. We value and benefit from their skills, their entrepreneurial spirit and the sharing of their culture”.

This is certainly the case in Aberystwyth, a coastal university town of approximately 18,000 people in Mid Wales. Here three women from different parts of Syria, united through a love of cooking, have set up the “Syrian Dinner Project” with the support of the British Red Cross (Crescent). As they say, they “work together as one, one heart, one soul in perfect harmony” their mission is to

Initially, they started by catering for small local events, but after hosting an event for 120 people in an Aberystwyth restaurant, to raise donations for Syrian families, they now host larger events around the country and have plans to grow their venture by developing “pop up” restaurants throughout Wales and the UK. 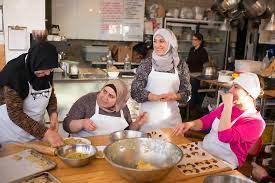 Rose Berwick of the British Red Cross in Aberystwyth believes that though they are not a charity, these events are important as the refugee women are no longer seen as victims but as ”people with something to share, something worth celebrating and something actually worth paying for”. As a result, the student daughter of one of the women, 20-year-old Ghofran Hamza, has established Aberystwyth’s first permanent Arabic restaurant, “Arabic Flavour” (Blas Arabaidd). In so doing, she was supported by Business Wales, including Catherine Rowland, a specialist Business Adviser with Antur Cymru Enterprise. Catherine, who has led an Antur investigation into the factors affecting the daily lives of Syrian refugees in Wales, observes that the women “have made major achievements since moving to Wales and have settled into their communities”, while Latifa Ainjjar, one of the founders of the Syrian Dinner Project, hopes that the success of the project will “motivate other Syrian families all around the UK to start their own projects. Projects that are useful to their communities”.

Apart from addressing SDGs 8 (Decent Work and Economic Growth), 1 (No poverty) and 2 (Zero hunger), the Project also addresses SDGs 10 (Reduced inequality) and 5 (Gender inequality) as well as goals 11 (Sustainable cities and communities), 12 (Responsible Consumption and production) and 16 (Peace, Justice & strong institutions). The women are not just in harmony with each other but with their community and the business support agencies, like Antur Cymru, that continue to support them. Importantly, also, they are in peaceful harmony with the natural beauty, wildlife and heritage that constitutes this magnificent UNESCO – recognised Welsh biosphere.