Originating in the 16th century, but not becoming commonplace until after William Murdoch’s invention of the gaslight in 1802, street lights are now regarded as an essential feature of modern living. Not only do they aid security but they contribute to safety and improve the quality of life. However, the energy source for the modern street light is electricity, not gas and this is contributing to both the energy crisis and the sustainability challenge facing the planet. Apart from consuming between 25 and 30 percent of the total energy consumption of a modern city, not everywhere has access to electricity [see the WaterLight case], though it is estimated that some 83 percent of the world’s population live under artificial lighting which brightens the sky by more than 10 percent

In an attempt to reduce costs, their carbon footprint, and light pollution, many administrative authorities have begun to refit their street lighting systems. Durham County Council in the North East of England is one such authority. Since 2013, the County Council has retrofitted some 60,000 lights across its region with more efficient LED lights and removed over 2000 lights deemed not to be needed. As a result, there has been a 69.7 percent reduction in annual energy consumption, an annual 8413-tonne reduction in carbon emissions, and saving of £24 million.

While such progress is highly laudable it is only alleviating the problem and is not addressing the safety and security problems resulting from the lack of street lighting in those areas of the world where there is no electricity supply. In contrast, a young design student at the University of the Arts in Berlin, Tobias Trubenabacher, has designed a street light that does both – and more. As he recognises, “light pollution not only has bad health effects on humans, like causing sleep disorders, depression, cardiovascular diseases, diabetes, and cancer, but has also a serious impact on flora and fauna, extinction of species, orientation loss of migratory birds, significant disorder for fish migration, as well as disturbing biorhythms of plants like for instance delayed leaf shedding”.

His solution, Papilio (Latin for butterfly), is a street light powered by an integrated wind generator that produces climate-neutral energy and is equipped with a rechargeable battery that enables the light to operate autonomously, without the need for costly, extensive underground cabling, and supplies surplus energy to the existing grid. To minimise light pollution the light has an infrared sensor so it only comes on when it is needed, only emits light downwards, and emits light that is not as attractive to insects. In Germany alone, it is estimated that in one single summer night around 1.2 billion insects die because of street lighting and to reduce this he collaborated with other researchers and scientists. 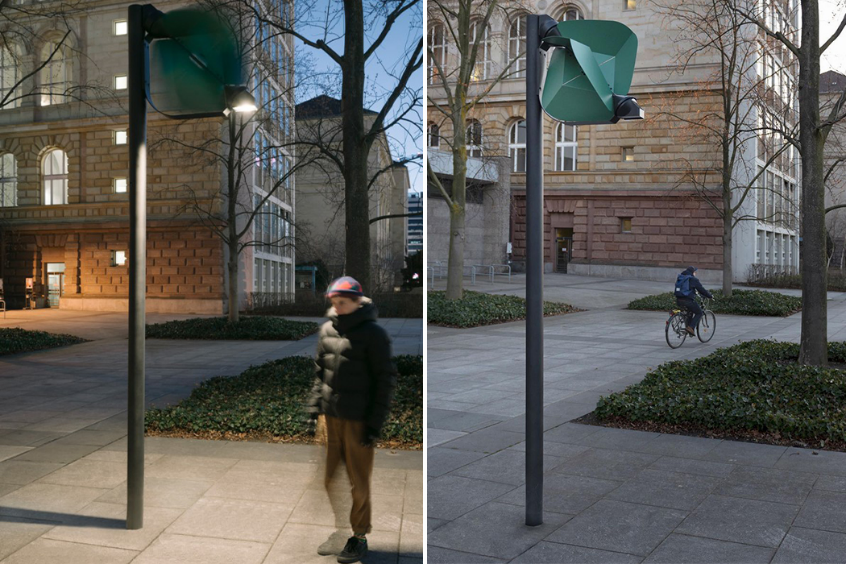 Beta testing in Berlin revealed that under normal wind conditions, the generator produces up to 12 volts of electricity, which is “easily enough to charge the integrated battery and operate bright light”, Tobias explained.

He has not yet taken the invention to market though he intends to do so in partnership with people who believe in the idea as much as he does. He believes strongly that “if we want to maintain a future worth living in, we urgently need to transform our cities into climate-neutral, sustainable and less harmful places”. When he finds his like-minded partners and launches his venture, he will be founding, therefore, a harmonious enterprise that does not just address SDGs 13 (Climate action) and 11 (Sustainable cities and communities) but SDGs 7 (Affordable and clean energy) and 9 (Industry, innovation, and infrastructure) as well as 8 (Decent work and economic growth), 10 (Reduced inequality), and 12 (Responsible consumption and production), plus 17 (Partnerships to achieve the goal). Papilio will also be contributing towards SDGs 3 (Good health and wellbeing), 14 (Life below water), and 15 (Life on Land).

Myers, L.,(2021), Papilio is a wind-powered street light that switches on only when it is needed. Designboom.17th May.

© Harmonious-Entrepreneurship.org (2021). Unauthorized use and/or duplication of this material without express and written permission from the author is strictly prohibited. Excerpts and links may be used, provided that full and clear credit is given to Professor David A. Kirby and Harmonious-Entrepreneurship.org with appropriate and specific direction to the original content.